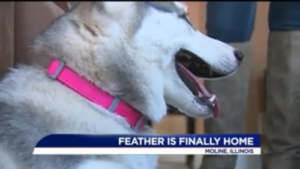 6 months after Feather the Siberian Husky was stolen right out of her own backyard in Moline, Illinois, her mom, Briana Martin, received a Facebook message from a stranger. The stranger said that he had just found out from his cousin that his parents – whom he is estranged from – had stolen Feather and taken her to live with them in Cedar Rapids, Iowa – nearly 90 miles away from where they had stolen her.

“It’s not real. I’m still kind of in shock that she’s here.”

After 6 months with no sign of Feather, the family had lost almost all hope of ever seeing her again. That is until the stranger contacted her on Facebook. She told WQAD:

“He messaged me and said [his] parents stole her out of my backyard. I was very shocked. I just kind of stared at my phone for a second and said what? Once I got my bearings, I said okay, what’s their name, what’s their address. Where can I find them?”

Briana is pressing charges against those who stole Feather and hopes they will spend some time in jail as a punishment for taking Feather away from the family that loves her.

“I wish I could know what’s going on with her in the past six months, where she’s been, what she’s done, how she liked her first snow, but she’ll just be with us forever.”

Choosing The Best Joint Supplement for a Schnauzer