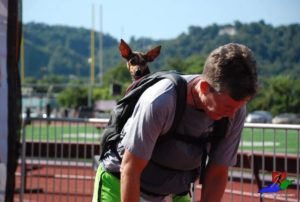 Janet Turner has turned her passion for rescue into a movement.
She’s bringing awareness and raising funds for worthy pet rescues
with #RunningForRescues,
and her best friend, Gordon, has her back!

Janet Turner has many loves in her life. She has a house full of
pets, including a few with special needs. Not long ago she adopted
a dog named Molido from the Soi
Dog Foundation in Phuket, Thailand. Molido was a street dog who
was found in terrible condition by tourists. She lost the use of
her back legs, but now lives happily with Janet. Her second special
needs dog, Gordon, who also has no use of his legs, was adopted two
years ago and accompanies Janet while she does one of the things
she loves most: running. Sam, Leftee, and a cat named Carter round
out Janet’s pack.

Janet has been running since she was 13, but it was only
recently that she realized that she could combine her sport with
her passion for animals to make a difference in the world. She
tells iHeartDogs,

“I had run the Chicago Marathon and fundraised for one
particular organization. I saw that I was able to advocate and
educate well enough that I could raise money for animals.

“I found there were many organizations that were hurting. I
thought why just have the mindset that you just want to help one,
when you could help many and make a bigger impact on communities? I
prefer fundraising for the little guy if you will. I prefer new
rescues up-and-coming and shelters that get very little foot
traffic in their areas.”

“I coined the phrase #RunningForRescues because I didn’t
want to just run for one particular organization. I wanted to be
able to support many organizations and I felt that I needed to pull
away and let folks know that I was interested in supporting lots of
folks. I didn’t want to tie up all the donations for one place
when I could share the love. “

Janet’s goal is to help as many rescues as she can, spreading
the word about helping out the little guy – the small local
rescues who are doing something wonderful for pets on a small
scale. They may not get the attention that bigger organizations get
or help as many animals, but by raising awareness they can help the
pets in their own backyards – and that’s important too!

Janet especially loves showing support for the rescues where she
found her family. One of the first marathons she did in support of
a rescue was the Marshall Marathon in Huntington, West Virginia for
the Humane
Society of Pleasants County, where she adopted Carter.

“That’s where my journey began in trying to help animals. I
had initially volunteered at the shelter on Saturdays. And  that
truly is how things really got started and progress towards what we
are doing today.”

Janet runs because she loves it, but she also does it for the
causes she loves. She has raised thousands of dollars for worthy
rescues – far surpassing her original goal.

“My next goal is coming up in May. I am fundraising for a dog
rescue out of California by the name of SOS Dog Rescue-
Strength of Shadow. It is a new and up-and-coming rescue and
they just recently purchased the Shadow Ranch.

“I am organizing a running team for SOS. The charity
coordinator has been gracious enough to allow SOS to become a
charity partner for the race. This is going to open the doors for
the rescue in getting more people interested in supporting them.
So, this particular goal is a step further than what I had been
doing. This particular fundraiser will have a long term effect.
Through future racing, SOS will continue
to benefit not just in 2020.”

While fundraising for rescues Janet found that her cause was
making a difference in her life, too. As an unexpected bonus, she
saw herself growing as a person.

“Not only did I have a financial goal, I had a goal to grow as
a human. I was a very shy and awkward on social media. I now have
definitely surpassed any expectations of what I thought I would
look like in the beginning to now.

“I do live videos frequently and very rarely am I nervous. I
became much more confident person and really discovered that I was
a very passionate about animals. I’ve always loved animals but I
had no idea I was so passionate about them. I was extremely proud
of myself for stepping out of my comfort zone and sometimes in life
we have to do that to be able to make a difference.”

#RunningForRescues
is a one-woman-movement, but Janet has never been on this journey
alone. She’s always had supporters, and most importantly: her
pack. Gordon accompanies Janet on her runs sitting in a backpack
she carries with her. He may not be able to run on his own, but
Janet says he loves to be with her.

“I enjoyed running with my late dog Moose and I knew that I
wanted to run with Gordon before I adopted him. I purchased a
backpack for him to ride in due to the fact that he was a
paraplegic and would not be able to run by my side. Gordon
absolutely loves being with me whether it in a backpack or just
hanging out at home.”

Janet is only getting started. She has big plans coming up and
is taking #RunningForRescues international – starting with the
rescue that connected her with Molido, the Soi Dog Foundation.

“Not only am I going to run a race for them, I have plans to
go visit them and volunteer for a week to let them know how much I
appreciate what they’ve done for myself and for Molido.”

You can become a part of Janet’s team by supporting her work
as she continues #RunningForRescues! Learn
more about her cause and her pack on Facebook!

The post
This Woman is #RunningForRescues with Her Disabled Dog appeared
first on iHeartDogs.com.

Source: FS – Dogs – iHD
This Woman is #RunningForRescues with Her Disabled Dog

Grieving Woman Gets Sign That Late Dog Is Watching Over Her

Shelter Dog and His Unlikely Best Friend Go Home Together