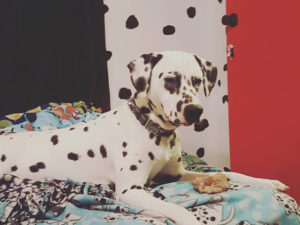 You might be dog-crazy, but if you’re not transforming your home into a shrine to your dog, you’re not as dog-crazy as Amanda Renae. Amanda adopted her adorable dalmatian pup, Cloud, a year and a half ago, and fell so far in love it’s bordering on crazy. Not that there’s anything wrong with that – we’re big fans of crazy when it comes to dogs! And who wouldn’t fall head over heels in love with this face?

Amanda is the best dog-mom, and shows her love for Cloud in some pretty awe-inspiring ways, including this tattoo she added to her arm that matches exactly a spot pattern on Cloud’s coat!

The craziest thing she might have done out of love for Cloud might be the makeover she gave her home – complete with Dalmatian-print walls and plushie spotted dogs all over. It’s enough to make even the dog-craziest among us say “Wow, that’s crazy.” Metro UK recently shared the photos and helped set the bar higher for crazy pup parents. (Scroll through the photos to see more of the room.)

Firefighter And Her Dog Both Survive Severe Car Crashes